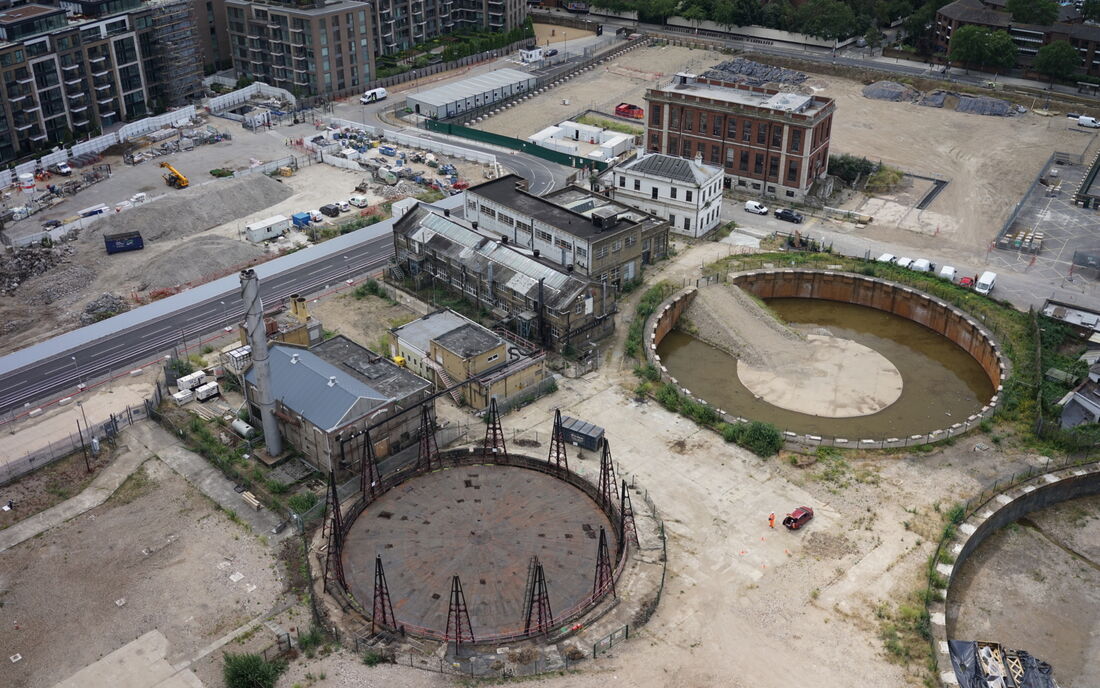 King’s Road Park is a 16-acre former National Grid site and part of the Fulham Riverside Regeneration Area. Once complete, the development will deliver more than 1,800 new homes and 100,000 sq ft of commercial space.

Having previously worked on the King’s Cross gasholders project, Plowman Craven was contracted by St William to survey the entire site and deliver a comprehensive BIM model that also features several listed buildings, including the world’s oldest surviving gasholder.

King’s Road Park is a large-scale regeneration of the former Fulham gasworks site in South-West London. Having previously worked on gasholder redevelopment projects at King's Cross and Kensal Rise, Plowman Craven was able to survey the entire site and deliver a data-rich BIM model that includes several listed buildings and the iconic gasholder No.2.

The centrepiece of the development will be the restoration of the Grade II*-listed gasholder, which was constructed in 1829 and was at the time the largest in the world with a capacity of 226,000 cubic feet. Other listed buildings on the site include the former Engineering Office and Laboratory of the Imperial Gas Light and Coke Company - dating back to 1856 and 1927, respectively - as well as two War Memorials. 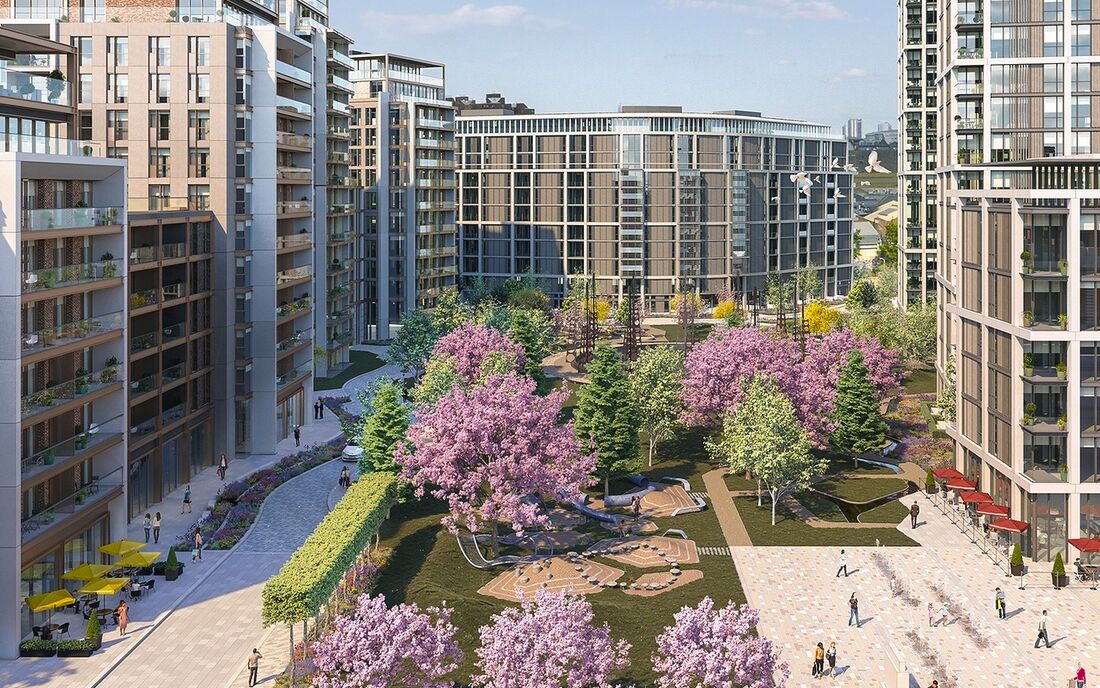 St William is a joint venture between the Berkeley Group and National Grid that specialises in the redevelopment of redundant gasholder sites across London and the South East. King’s Road Park is one of 19 such sites nationwide.

In addition to more than 1,800 new homes, the project will be set within six acres of beautiful landscaping - including a public park and square - and will also provide 100,000 sq ft of commercial space that will include restaurants, bars and offices. 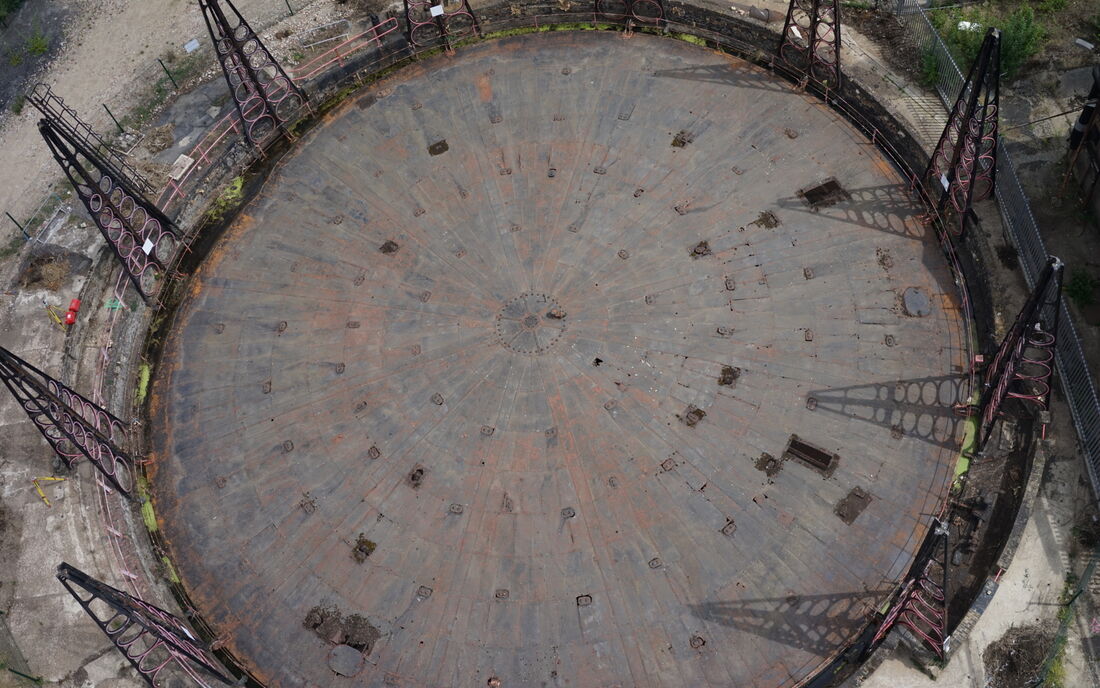 What did we do?

We have experience of working closely with developers, engineers, architects and project managers on a number of similarly-challenging former gasworks sites, providing highly-accurate 3D data that helps planning and design teams to successfully progress these complex schemes.

At King’s Road Park we collaborated with the client to create a bespoke solution that will enable informed decision-making throughout the development lifecycle. This included a number of complementary services and deliverables:

Plowman Craven’s PC Monitoring division has been involved from the beginning, providing a bespoke solution for gasholder No.2 – as well as the two other listed buildings on the site - that monitors potential structural movement during piling and excavation works. The system provides an early warning to the project team to assist with risk mitigation and help protect these heritage structures.

For our BIM team, there was also a very special challenge on this particular project. We originally flew our drone over the gasholder and also laser scanned it – as per a ‘standard’ Scan to BIM job – but that only showed the visible parts of the gasholder. Given that it is to become the centrepiece of the development, the client wanted a complete picture of the gasholder, both inside and out, that would help to inform design for its restoration.

But with the gasholder no longer inflated and the base full of water, accessing the inside in order to scan it would be virtually impossible until the dewatering process is completed and the structural integrity could be safely established.

As such, the client asked us to build a model of the internals of the gasholder – but without using any scan data. So, armed with a handful of historical architectural drawings from similar structures and a couple of old photographs of gasholder No.2 we took on the challenge of recreating the structural and mechanical forms. After many hours of work we were able to find a solution. 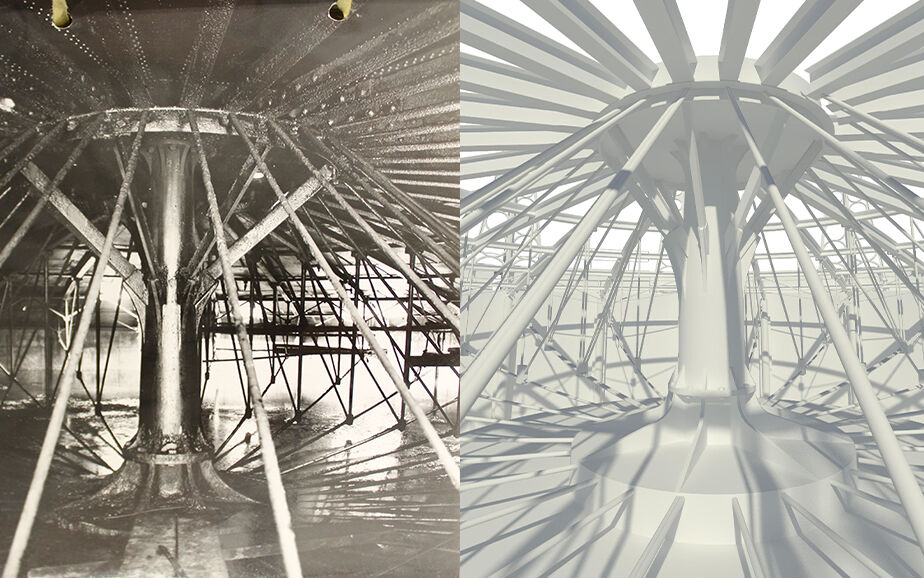 Using the recently built BIM survey model as a base, we overlaid the orthophoto (captured from the drone) to identify the position of the primary structural grids and the wrought iron radial trusses beneath the bell.

From there - after detailed analysis of the photographs – we were able to size the structural frame and mechanical features and build a model that would replicate the true components of the gasholder. This enabled us to visually simulate the gasholder operating as it did back in the mid-1800s. 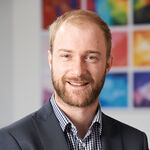 This was a very interesting and unusual project to be involved with. It started out as a standard Scan to BIM deliverable, but as we built a relationship with those at St William and illustrated what is possible, the aspiration to build a detailed record model of the gasholder interior became visible.

This was easier said than done – it took a combination of specialist structural and mechanical knowledge held within our BIM Centre of Excellence and a problem-solving mindset to turn this vision into reality. We look forward to challenging our interpretation of the structure by verifying it against point cloud which we’ll capture once the gasholder has been successfully dewatered and made safe and accessible. 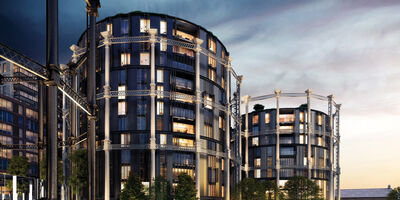 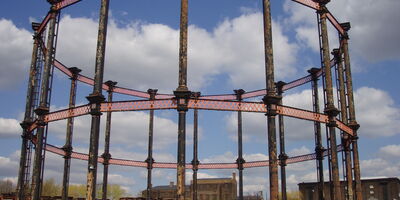 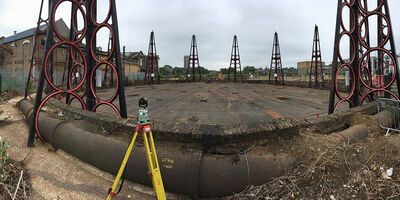